According to a recent Microsoft study, 85% of consumers will consider buying a product only if they trust the brand. Nowadays, buying implies endorsing, which leads consumers to think twice about the ecological and social impact of those brands and their products.
This anti-consumerism momentum forces companies and marketing teams to make sure that their approach and their storytelling are in line with their consumers’ concern.From a communication perspective, it is today crucial for firms to be responsible, moral, inclusive and to let people know about it. This approach enables them to build trust with the public, to trigger positive conversations about their brand, and to increase their global performance.
These 4 following campaigns show that doing the right thing for communities is what brands need to do.

Recently, the American razor brand Gillette has decided to put aside the archetypal and traditional representation of masculinity.Transgender people, a gay couple, pimply teenagers…Burying its historic motto « The Best a Man Can Get », the brand now promotes diversity and conveys a new message – far removed from the toxic masculinity criticised by the #metoo movement – a more complex and subtle vision that celebrates the various ways of being a man.Since the first broadcast of the campaign during the halftime of the France vs Portugal football game, the brand is inviting communities to come and find them on Instagram, where they start the conversation by having modern men testifying about how they don’t recognize themselves in the stereotypes conveyed by society.A clever way of celebrating differences and keep on fostering change in our society.

Starbucks is an iconic brand for numerous reasons, but it is particularly renowned for the free media exposure they get by simply misspelling the names of customers on their cups. What if, beyond the fun fact, the company was actually acknowledging the identity chosen by its customers ?Asking someone’s name, writing it down on a cup and calling him is part of the brand signature and of the experience that they offer. This moment creates a connexion between the barista and the customer.#Whatsyourname showcases the importance that this trivial action can have for some transgender or gender-diverse persons when they use a new name in public. This campaign actually stems from genuine testimonies made by transitioning persons who found in those coffee shops a safe place, where they are accepted and recognized as they are. Awarded best campaign during the Diversity in advertising awards, the funds collected by #whatsyourname were invested in the « Mermaids » NGO, that support and guidance to transgender people and their families.In order to collect new testimonies and gather communities around this initiative, Starbucks produced a series of « Moving Portraits » that they released on Social Media, which enabled thousands of persons to connect and to know that they will always be a place where they’ll be accepted as they are.
#Whatsyourname resonated with a worldwide audience, triggering more than 2000 articles in the press and reaching millions of persons through Social Media. 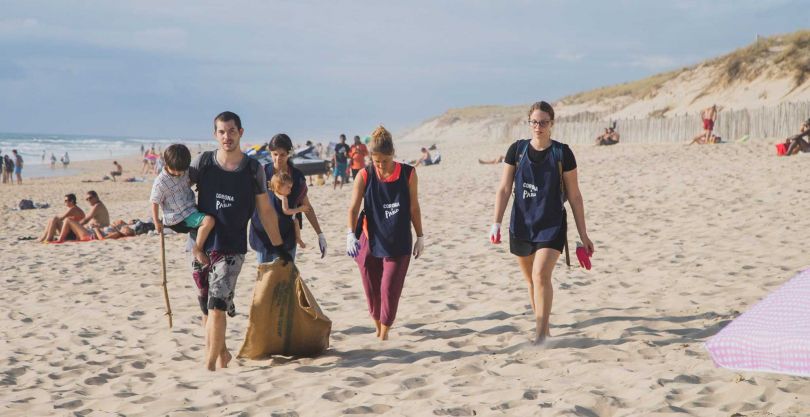 Among all the ecological challenges that we are currently facing, the spread of plastic pollution in oceans and on beaches is probably the most symbolic one in the eyes of the public.A perfect subject for Corona to embody its CSR policy, isn’t it ? After all, isn’t Corona the ultimate beach beers?This travelling activation encourages people to clean up a 1m2 stretch of beach to raise awareness about plastic pollution and incite populations to preserve the ecosystem of French coasts.Opinion leaders committed to the environmental cause, local celebrities and the general public gathered behind this 20-day long project, therefore launching a large scale movement on social media, which strengthened Corona’s environmental credibility.
This activation had 13 million people react on social media in one month.

At the heart of the Coronavirus pandemic, Crocs was called upon directly by its community to commit concretely in the fight against the virus. The shoe manufacturer therefore unveiled its « Free Pair For Healthcare » digital campaign, donating 40 million dollars worth of shoes to caregivers. An action that fostered brand love and built trust.
« Our community is a muscle that we created over the last few years and that we can rely on to make good decisions ».
Heidi Cooley, Crocs, Head of world marketing – Marketing Dive
The brand chose several years ago to allocate all its marketing budgets in the construction of a faithful and close digital community. Its digital platforms has therefore become the focus point of all its communication efforts.This digital approach improved performance. Indeed, by listening to their community,Crocs managed to show business agility and fostered a 52.4% growth in e-commerce revenues for the second trimester of 2020 .

Newsletter
Don't miss our last articles. Subscribe to our newsletter!